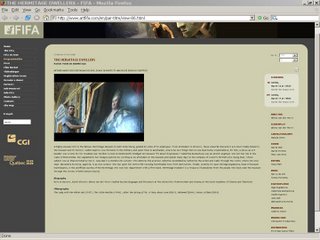 TVOntario prepared a present for us:

Hermitage-niks: A Passion for the Hermitage

HERMITAGE-NIKS--the five-part, in-depth series version of THE HERMITAGE DWELLERS-- is not necessarily about the art that resides in the world renowned museum, but about the people who work in the Hermitage.

These "Hermitage-Niks" all have their own very personal reasons for considering the palace of Catharine the Great their "home." For them, it is a safe haven that quite literally has managed to keep the tumultuous Russian 20th century history outside its walls: from the Revolution, the terror of Stalin, WWII, the harsh post-Soviet years - all these events have left their mark on the museum. What starts out as a playful kaleidoscope of people and events in the museum gradually unfolds into a poignant account of how the dwellers' pain is transformed by their intimate relationship with a piece of art.

The five episodes of the series:
Episode 1 - A GLIMMER IN THE EYE
Episode 2 - GUARDIAN ANGELS
Episode 3 - EMPTY FRAMES
Episode 4 - SILENT SABOTAGE
Episode 5 - THE REMAINS OF AN ERA

Hermitage-niks: A Passion for the Hermitage
Episode 1
A Glimmer in the Eye
Art is an embellishment of life, but it can also be an indispensable counterweight for the darker side of existence. Given the catastrophes that Russia has gone through in the last century, art is no a superfluous luxury. Staff at the Hermitage do not work for money (their jobs are badly paid), but for "that other thing." Art handler Vadim, attendant Valentina and curator Juna tell us about their most beloved artworks and explain the cherished concept "Hermitage-nik."

Episode 2
Guardian Angels
Alexandra (82), icon curator, has spent her entire life rescuing icons from destruction. Just as icons come alive for Alexandra, Rembrandt's Danae comes alive for other Hermitage-niks. This painting of "unworldly beauty" was severely damaged in 1985 by a lunatic. It was a most traumatic experience for the Hermitage employees, who speak of Danae as if she were a dear friend.

Episode 3
Empty Frames
Olga (76) is head of museum maintenance. This unofficial czarina of the Hermitage runs her department with a firm hand and is forever marked by the Second World War when she and the Hermitage-niks saved the artworks from the mortality of war. But art was also their savior in times of hunger and cold.

Episode 4
Silent Sabotage
In the 1930s, Stalin sold off the collection's best works. The Hermitage-niks hid many works that had not already been sold, such as the wonderful paintings of Monet and Matisse, burying them away in the bowels of the museum. Stalin and his cronies called works like these "capitalistic, depraved art," but the Hermitage-niks gave the censorship commission a taste of its own medicine.

Episode 5
The Remains of an Era
Catherine the Great is still omnipresent in her winter palace. Her megalomaniacal, gluttonous acquisitions are in stark contrast to the Hermitage's present-day purchases. Petersburgers try to pass their last heirlooms on to the museum, while schoolchildren gape at the splendour of bygone times.

Posts that contain "Hermitage Museum" per day for the last 30 days.

Get your own chart!
Posted by The Vision Builder at 12:26 PM No comments: