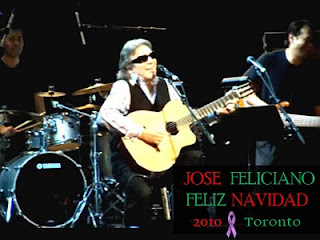 This year marks the 40th anniversary of the release of Jose Feliciano's evergreen and beloved Christmas classic Feliz Navidad. So, we can think that the official Christmas season 2010 begins tonight with Jose's performance of his Christmas classic song.

The Concert Under Hounorable Patronage of the Consul General of The Republic of Poland will raise awareness and funds for Epilepsy research and The Children's Memorial Hospital in Poland.

A Legend in Concert - Jose Feliciano in Concert in Toronto
Feliz Navidad -- 40th anniversary of the release of the most popular Christmas song around the World; World Holiday Tour 2010
Saturday, November 27, 2010 At the Queen Elizabeth Theatre

Enjoy live performance of a magnificent artist Jose Feliciano singing his hit Feliz Navidad -- a classic of the Holiday!

Feliz Navidad!
Posted by The Vision Builder at 11:55 PM No comments: 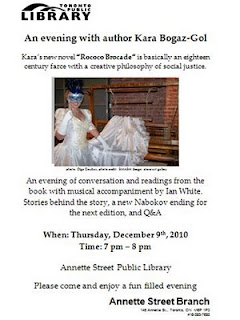 You are cordially invited to

An evening with author Kara Bogaz-Gol

An evening of conversation with Kara Bogaz-Gol, the author of her new novel Rococo Brocade, and readings from the book to be chosen by the audience using stichomancy with musical accompaniment by Ian White.

Ian has been playing guitar since his older brother made the mistake of showing him a few chords. His brother hasn't seen his guitar since. Influenced by the fingerstyle guitar work of players like Don Ross & Michael Hedges, Ian uses his guitar to say what cannot be expressed in words.

Kara will discuss the books that influenced her work. She'll reveal some of the stories behind the story, poems which have never been published, some anecdotes about who is who in the novel, a new Nabokov ending for the next edition, and Q&A.

Hi, starbucks. What Kind of Art Do We Find in New Junction Hot Spot? 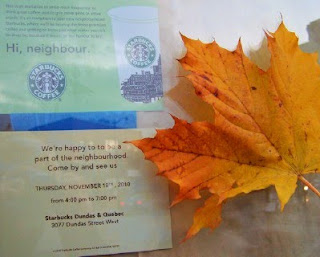 Photo: Hi, starbucks.
Invitation to the Junction Starbucks
Thursday, November 18, 2010
from 4:00 pm to 7:00 pm
Starbucks Dundas & Quebec
3077 Dundas Street West
2010 @ artjunction.blogspot.com
It looks like an invitation to the grand opening:

We are happy to be a part of the neighbourhood

Come by and see us

Please check with the Starbucks Dundas & Quebec for their holiday operating hours. 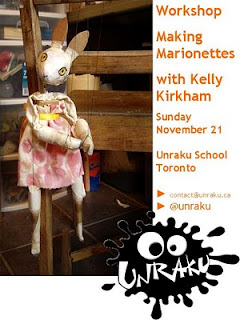 In this special one day workshop presented by Unraku, local puppet builder Kelly Kirkham will show you how to build beautiful and functional marionettes out of common household materials. Using items such as newspaper, wire, wood and stones, you will create a marionette that can come to life, and walk, dance or jump. The type of character you create is up to you, be it animal, human, or other. Techniques that will be used include sculpting, collage and basic hand sewing.

Kelly Kirkham is an artist, illustrator, puppet maker and Unraku co-founder who lives and works in Toronto and has led puppet building workshops in both Canada and Barbados. You can see more of her work on her website at www.runrabbitrun.ca.

For more information please visit the web site at http://unraku.ca/2010/11/unraku-school-making-marionettes-with-kelly-kirkham/

Exciting Announcement: New Book about the Junction Renaissance Is Coming Henry Calderon at WTJHS Meeting
Originally uploaded by IT Ceremony.
How the Junction Got Resurrected
Revitalization Period 1998-2004 & Beyond
By Henry Calderon
The Story to Be Told...

It was in the fall of 1998 when it all began to unfold. The story of 3 women who after spending an afternoon at Wasaga Beach a year earlier put in paper how this could happen and who will do it! “Resurrect the Junction”…"Revitalize the Junction”...“Take the Junction from despair and lost of Hope”, it was their real challenges.

Santa Cuda, the owner of the Flamingo Hall, Piera Pugliese, the owner of Vesuvio’s Pizzeria and Maureen Lynette, the owner of Lynette Funeral Homes. A wedding planner, a pizza maker and a funeral arranger. To me it was an interesting combination. First, you get marry then, you celebrate and then, you die. Three interesting services you will find in the Junction today.

To unfold the resurrection of the Junction, a district in the West End of the City of Toronto, which for almost 100 years was a dry area where no alcoholic beverages could be bought and no restaurants could serve the fine wines of the world. It was a challenge from all perspectives.

The referendum about whether you could go from dry to wet was won by one vote in 1997 during the municipal election but it could not come into effect after a year later to ensure that the consumers and restaurants were ready to accept their responsibilities. It was at this moment in time when I was hired for a 12 month contract after an arduous search and interviews with many well respected candidates as a top consultant in the business of Main Streets Revitalization in the country. A one year contract that grew to six years so, I could experience, talk and write in later years how the Junction got resurrected.

Now, I am writing a book with a working title “How the Junction Got Resurrected” where the critical milestones of the revival of the Junction and the whole story of the rebirth of the Main Street will be published.