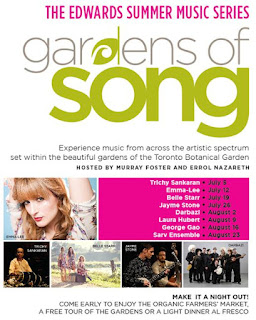 Experience music from across the artistic spectrum set within the beautiful gardens of the Toronto Botanical Garden. Hosts for the evenings include Murray Foster, of Moxy Früvous and Great Big Sea, and Errol Nazareth, a regular on CBC Radio One’s Metro Morning and a columnist for The Toronto Sun.

Thursdays starting at 7 p.m. during July and August. Rain or Shine. (concert will be held in doors if it rains)

Bring your own chair or borrow a stool from our visitors booth. General seating.

Please note: Artists and programs subject to change without notice

Make it a night out! 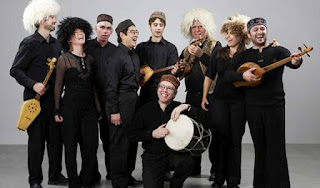 deepdownproductions.com: Georgian Music: Darbazi & Friends, "Music From Beyond the Black Sea"
Great Musical Instruments & the best in roots music from around the world.

deepdownproductions.com: Georgian Music: Darbazi 1997 tour of Georgia
"During the summer of 1997, 12 or so of my friends and choirmates in Darbazi and I decided to take a tour of Georgia. While there we were joined by the trio Kavkasia, an American trio who also sings the music of the Republic of Georgia. Our plan was to sing at concerts, learn songs and to absorb Georgian culture." >>>
by Mike Whitla

Posted by The Vision Builder at 10:16 PM No comments: 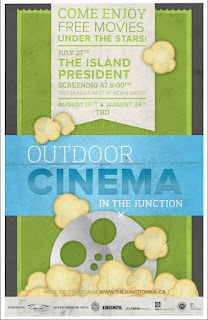 Once again, the Junction Business Improvement Area (BIA) will host free movies under the stars this summer.

OUTDOOR CINEMA IN THE JUNCTION

August
17th- Fantastic Mr. Fox
(Oops! "#JunctionTO Movie Night has been postponed to next Friday due to weather. Same movie, same place, same time- Next Friday. See you there! "
@junction_bia)

Sponsored by the Junction BIA

On Friday, July 27, the BIA presents ‘The Island President’ at Dundas Street West and Indian Grove, starting at 9 p.m.

The documentary film by Jon Shenk tells the story of President Mohamed Nasheed of the Maldives, a man confronting a problem greater than any other world leader has ever faced – the literal survival of his country and everyone in it.

Having brought democracy to the Maldives after three decades of despotic rule, Nasheed must now overcome an even greater challenge: one of the lowest lying countries in the world, its 1,200 islands are at risk of being submerged should sea level rise as little as three feet. The film captures Nasheed’s first year in office and follows him to the Copenhagen Climate Summit in 2009.

More movies under the stars will follow on Aug. 10 and Aug. 24. Films are to be announced.

August 24th - The Whale (2012)
a documentary narrated by Ryan Raynolds

The Whale tells a true story of an orca nicknamed Luna, who makes friends with people after he gets separated from his family on the rugged west coast of Vancouver Island, British Columbia. As rambunctious and surprising as a visitor from another planet, Luna endears himself to humans with his determination to make contact, which leads to laughter, conflict and unexpected consequences. Rated G.

Outdoor Cinema in the Junction: It's Time for Another Movie Night!

Movieola Movie Night is New at the 16th Annual Junction Arts Festival
Posted by The Vision Builder at 1:55 PM 1 comment:

Vintage Russian toy: A cute little Hedgehog, made in USSR
"My childhood toy — ...I call it a hedgehog,
but who knows what it actually is." Sophie Milman
Image credit: torontolife.com: The List Ten things
jazz singer Sophie Milman can’t live without
Almost everyone knows Sophie Milman now, so she doesn't need an introduction. She is an internationally acclaimed, Toronto-based, Juno Award winning jazz singer.

Do you know 10 things she can not live without? Here is Sophie’s list of favourite things published in the July 2012 Toronto Life magazine's issue.

pets.sympatico.ca: Sophie Milman and Will
by Sarah Hosick

Credit: @sophiemilman
Posted by The Vision Builder at 6:18 PM No comments: