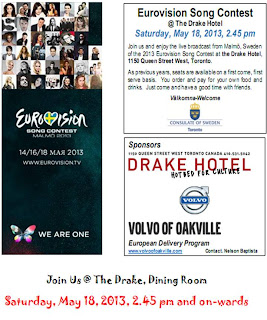 
The original reality show, the Eurovision Song Contest (since 1957, don't ya know) belts it out on the Sky Yard this afternoon. Come watch a colourful cast of characters compete for pop supremacy! Will they be as good as ABBA? (the 1974 winners) only time will tell.

The Grand Final will be broadcast live in all participating countries. You can also watch the Grand Final online here on Eurovision.tv!

The Running Order for the Grand Final is as follows:

Update: The 2013 winner of the annual Eurovision song contest is Danish singer Emmelie de Forest with her ethno-inspired flute and drum tune Only Teardrops:

The Junction Flea is back in the Junction: June 9, Same Place, Same Time 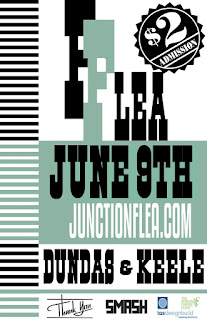 The monthly Junction Flea is back in the Junction at the corner of Dundas and Keele at Indian Grove.
The first outdoor event of 2013's season is coming this weekend was on Sunday, May 10!


When is Keele and Dundas flea market open?

This season's markets fall on the following dates:

Where to find Junction Flea from May to October 2013:

Located on the usual lot 2799 Dundas Street West, just east of Keele and Dundas West in the #JunctionTO. 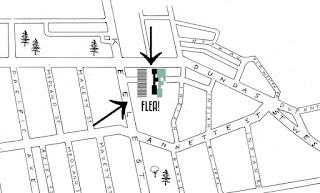 Mark your calendar and be sure to come to all of the Junction Flea's Sundays!

links - check them out:

Debut of the Junction Flea Market
#JunctionFlea Sunday, June 10, 2012
+ New images from August 12th Bazaar
flickr: itceremony
Posted by The Vision Builder at 12:56 AM No comments: