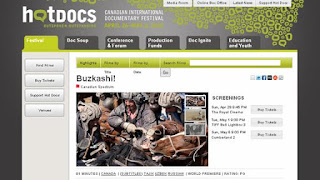 Screenshot: HotDocs: Canadian Spectrum: Buzkashi!
World Premiere, Director: Najeeb Mirza from oxusfilms.com
Sun, Apr 29 9:45 PM at The Royal Cinema
Credit: hotdocs.ca
"Buzkashi, a game supposedly devised by Genghis Khan,
pits men and horses against each other
in a ferocious struggle for possession of a headless goat."
By Julius Cavendish in Mazar-e-Sharif, 09 April 2010,
The Independent: Anyone for headless goat rugby...?
One of the Canadian highlights at the 2012 Hot Docs Canadian Documentary Film Festival is Najeeb Mirza's fourth documentary, Buzkashi!, that goes into the world of a horse-riding battle sport played in the Tajikistan's mountains. The film will be screened as part of the Canadian Spectrum, a competitive program showcasing the work of Canadian directors.

In Tajikistan's mountains, the ancient sport of Buzkashi pits individual horsemen against each other. Champion Azam plays for honour and integrity, but his success is threatened by "mafia" influences that could transform the game-and country-forever.

Buzkashi!
In Tajikistan’s majestic Pamir mountains, horse riders battle in a centuries-old sport that pits individual riders against one another. Azam, a successful shepherd and Buzkashi champion, is experiencing drastic change. At home, his son prefers to study medicine than take over his father’s flock. On the field, Azam plays for honour and integrity but his main rival, Khurshed, threatens to change the game forever by using his seemingly infinite wealth to employ teammates in organized mafia-style alliances.
Sports documentaries have a powerful capacity to combine emotional, physical and cultural elements into unforgettable cinematic moments, and director Najeeb Mirza brings us into a world of underdogs and villains from a nation on the cusp of dramatic transformation. From the chaotic, brutal action of the game to the serenity of the quiet hillsides, we follow a man shaped by tradition, now forced to face the modern world that surrounds him.

More media coverage about the movie:

thestar.com: 10 Hot Docs documentaries to watch
... Tajikistan Buzkashi! Director: Najeeb Mirza
The poorest of the former Soviet Central Asian republics, Tajikistan has endured civil war, electricity blackouts, social upheaval and painful reversals since the end of communism. The polo-like national game of goat-dragging, or Buzkashi, played in the high Pamir mountains, is a metaphor for new Tajikistan’s clash of values, as honour and integrity vies with opportunism and new money in a struggle of all against all. Not even the remote villages are safe from the threat of a future trampled by the ruthless march of “progress.” ...
By Olivia Ward, thestar.com April 21, 2012,

NFB Docs Talks is an exciting series of hour-long conversations with festival filmmakers offering their insights into documentary filmmaking and storytelling.

Doc Talk 1 - Visual Innovation will be a discussion of how documentaries are utilising craft and technology to push boundaries in cinema and lead the way for innovative storytelling.

Tickets are FREE and can be obtained on the day of the event at the screening venue one hour before the first screening of the day, subject to availability.

Doc Talks are presented by the National Film Board of Canada
Posted by The Vision Builder at 8:12 PM No comments: 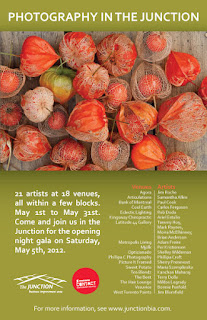 Photography in the Junction

Enjoy the work of 21 photographers in 18 locations along Dundas Street West from Quebec Avenue to Keele Street.


+ Continue down Dundas Street West at the SE corner of Quebec Ave to the Wise Daughters and past Clendenan Ave to the Telephone Booth Gallery! Also openings on the same night. 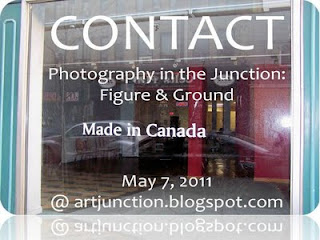 Posted by The Vision Builder at 8:12 PM No comments: 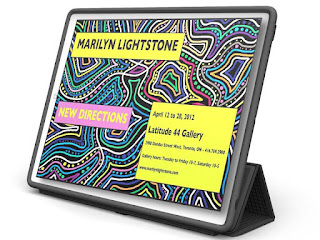 If you would like to read more about this show please go to an Inside Toronto article:
Artist finds new inspiration with iPad
Marilyn Lightstone's creations will be on display at Latitude 44 Gallery
by Lisa Rainford
Posted by The Vision Builder at 12:22 PM No comments: