Music from Caucasus and Balkans: Friendship and Wine 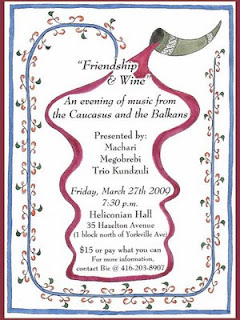 Poster: "Friendship and Wine" - An evening of music from the Caucasus and the Balkans
Credit: Machari
...The Older, the Better.

Dear music lover,
You are cordially invited for an evening with mainly Georgian folk songs, with a Balkan ingredient as well.

An evening of music from the Caucasus and the Balkans

Machari is an eight-member group of enthusiastic singers, whose name means "new wine", a metaphorical reference to the fomentation of new ideas.
Megobrebi is a twelve-member women’s group with friendship at its core and song as its expression. The name "Megobrebi" means "Friends".
Kundzuli means "Island" and is a trio of women singers from Toronto Island
Credit: megobrebi.ca

Note: We really enjoyed one of the previous concerts of the Toronto-based vocal harmonies in May of 2007. As Enhee put it: "Appreciation of different cultures is what brings us together, through songs, music and other arts. Perhaps the most direct, efficient, and certainly, most pleasant way.
Toronto is a great place to be to learn about the world…"

georgian music
Posted by The Vision Builder at 9:49 PM 1 comment: 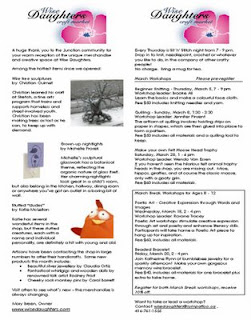 A huge thank you to the Junction community for your warm reception of the unique merchandise and creative space at Wise Daughters.

Quilling - Sunday, March 8, 1:30 - 3:30
Workshop Leader: Jennifer Pinsent
The artform of quilling involves twisting strips on paper in shapes, which are then glued into place to form a pattern.
Fee $50 includes all materials and a quilling tool to keep.

Make your own Felt Moose Head Trophy
Saturday, March 28, 1 - 4 pm
Workshop Leader: Wendo Van Essen
If you haven't seen the hilarious felt animal trophy heads in the shop, you are missing out. Mice, hippos, giraffes, and of course the classic moose, only with a goofy grin.
Fee $60 includes all materials.

Every Thursday is Sit 'n' Stitch night from 7 - 9 pm.
Drop in to knit, needlepoint, crochet or whatever you like to do, in the company of other crafty people!
No charge. Bring a mug for tea. 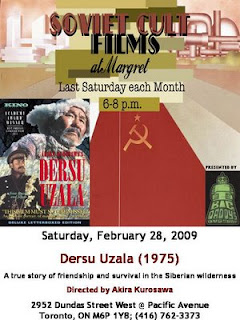 The sixth night of the Soviet Film club screens with a joint Soviet-Japanese film production, directed by Akira Kurosawa. Akira Kurosawa, known more for his samurai adventure films, directs this beautiful portrait of a man too noble to stand by as his world is swallowed up by civilization. Made at a turning point in Kurosawa's life (shortly after Kurosawa attempted suicide on December 22, 1971), Dersu Uzala is an exploration of loss, friendship and natural ties to the land we inhabit.
This film is set in the Sikhote-Alin region of Siberia in the period 1902-10 and is based upon the 1923 memoir of the same title by Russian explorer Vladimir Arsenyev. In the film, Arsenyev (played by Yury Solomin) leads a series of mapping expeditions in the region, where he and his team soon encounter an old local hunter, Nanai Dersu Uzala (1849-1908). In the film the Nanai people are referred to by their obsolete Russian name Gol'ds. Dersu Uzala (played by Maxim Munzuk) teaches the men many valuable lessons about wilderness survival and the meaning of life, eventually becoming a close friend of the explorer.
Dersu Uzala is the most Soviet movie for a Japanese director. Also the most Japanese movie shot in the USSR. From the Siberian wilderness Kurosawa crafted some of his most striking imagery. This movie about wisdom, friendship and harmony that now is almost extinct.
The film won the Grand Prix at the Moscow Film Festival and the 1975 Oscar for the Best Foreign Language Film.

** The AJ (artjunction) is an independent, local blog dedicated to arts and culture events in the Junction area of Toronto West, and Russian cultural events coming up in Toronto.

criterion.com: From the Current: Dersu Uzala
"Kurosawa made the acquaintance of Desu Uzala thirty years earlier, when he read Vladimir Arseniev’s account of charting the Russian-Manchurian border in the earlier part of this century."
By DONALD RICHIE
Published: July 18, 1995

ruscico.com: : Dersu Uzala
"In the course of their travels, a real-life character, Dersu, was revealing to his friend, the secrets of the Ussuri taiga, the animals’ special ways, the traditions and beliefs of the indigenous people."

dersu uzala
Posted by The Vision Builder at 7:47 PM 1 comment: 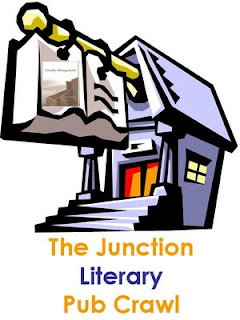 We’ll be making literary history in the Junction on April 18. The Toronto Public Library/Annette Street Branch and the Junction Historical Society present the Junction Literary Pub Crawl with Glen Downie. Glen’s Loyalty Management won the 2008 City of Toronto Book Award and was just announced as TPL’s selection for Toronto's second annual Keep Toronto Reading One Book program. From now through April, the library is encouraging everyone to read Loyalty Management and join discussions and events throughout the city exploring the books themes, issues and ideas.
We begin at 2pm at the Annette Street Library -- celebrating its Centennial this year! – where Glenn will read. Mayor David Miller has said that Glen’s poetry "beautifully evokes Toronto and its neighbourhoods – from the Victorian houses of the Junction to the sculptures outside our skyscrapers, but also looks beyond our city."
Then, through the miracle of Quantum Metaphysics, one of the flowers of the Junction returns to read some of her spellbinding verse. Born at 38 Keele Street, the short lived and brilliant Gwendolyn MacEwen (played by Kristen Buckley) grew up here.
Junction journalist A.B. Rice (Neil Ross) will lead a historical literary tour through the streets of the Junction -- accompanied by Glen and Gwendolyn -- as we meet the mystery writers, novelists, comic book writers and swashbuckling poets who make up a unique literary heritage.
Our destination, appropriately, is the Troubadour (3071 Dundas Street West) where Glen will read some of his favourite poems. Then the day will be thrown open to Junction poets. Poets who would like to participate are urged to sign up at the Annette Street Library (145 Annette St. 416-393-7692). You can sample Glen Downie’s poetry and see a video of Glen in the Junction at: www.toronto.ca/book_awards/2008/loyalty-management.

Make a Jane's Walk Happen in the Junction: Lead a Tour 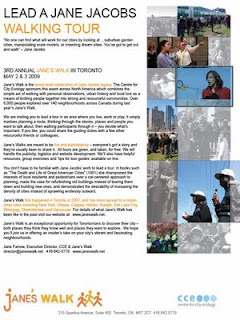 Jane’s Walk is the street-level celebration of Jane Jacobs legacy. The Centre for City Ecology sponsors this event across North America which combines the simple act of walking with personal observations, urban history and local lore as a means of knitting people together into strong and resourceful communities. Over 6,000 people explored over 140 neighbourhoods across Canada during last year’s Jane’s Walk.

We are inviting you to lead a tour in an area where you live, work or play. It simply involves planning a route, thinking through the stories, places and people you want to talk about, then walking participants through it – you decide what’s important. If you like, you could share the guiding duties with a few other resourceful friends or colleagues....

Jane’s Walk is an exceptional opportunity for Torontonians to discover their city – both places they think they know well and places they want to explore. We hope you’ll join us in offering an insider’s take on your city’s vibrant and fascinating neighbourhoods.

For more information, download the Tour Guide Invitation or the Partnership Outline document. 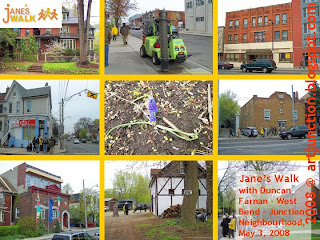 Art as Inspiration for the Semantic Web

Artist-in-Demand: Art in an Era of the Semantic Web
2009 @ artjunction.blogspot.com
The inspiration for this post was a recent conversation about art museums and their contents.
What makes a thing become a piece of art?
This image was an attempt to express the meaning of an object as a particular piece of art.
The influence of Malevich's works and a semantic web tagging technique is obvious. And the rest is up to You and Google.
Posted by The Vision Builder at 6:48 PM No comments:

Invitation to Fundraiser for the Film "Final Dance", Screenplay by Vladimir Milman 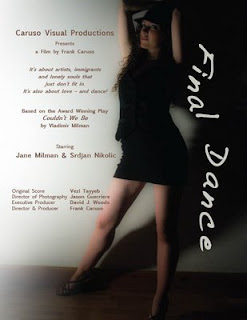 It's about artists, immigrants
and lonely souls that just don't fit in.
It's also about love - and dance!

I invite my friends and colleagues to attend this Friday night fund-raising wine and cheese party for the feature film by my screenplay. It is being organized by film producer and director Frank Caruso. I'd simply much appreciate it if you come and if you could further spread a word.

link:
The Arts Junction: First Impression: Couldn't We Be, Phoenix Theatre, Toronto
by Anya
Posted by The Vision Builder at 5:31 PM 1 comment: Nation of Irony Mongers:
Roots of the Canadian Sense of Humour
With Neil Ross

NATION OF IRONY MONGERS is a new series of two minute radio vignettes produced by CBC's Content Factory, tracing the historical development of humour in Canada from aboriginal times to the present. The series begins February 9, airing on local morning shows for nine weeks.
See a special preview this Thursday, February 5, at the Annette Street Library at 8:15 pm. Written and presented by Neil Ross, the sketches recreate key moments in the Canadian comic continuum. Episodes include:
"Twice as Long as a Heritage Minute and Three Times as Funny!"

(One and a half blocks west of Keele)

Admission: Free
Posted by The Vision Builder at 7:59 PM 2 comments: