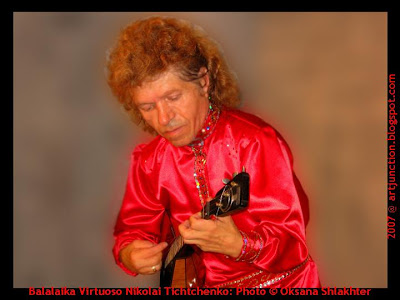 Most everyone has seen a busker, these fiercely independent musicians who earn a living of sorts playing music at random spots in Toronto’s subway stations and busy street corners.

A friend of mine decided to speak to one of them, to see what makes a busker.
We talked to Nikolai Tichtchenko. Or Nicholai "Balalaika", after the musical instrument he carries with him wherever he goes, a small, guitar-like instrument which is a vital part of Russian folk music.

It is his life and joy, an instrument which he has played since the tender age of 6.
Nicholai is from the Ukraine. He graduated from the Soviet State conservatory and belonged to the musical group of the Kiev Circus in the former Soviet Union.

Their group was contracted to perform in Canada for a year however the contractor unfortunately ran out of money and before the year was out everyone in the musical group had to fend for themselves. Like Nicholai most decided to remain in Canada and are now legal residents here.

While his former colleagues have taken up other professions to secure a steady income, Nicholas remains a balalaika player to this day. As he put it, he and his instrument are inseparable.

He performs in shows or other events, and has been in one movie with Robin Williams and Danny DeVito "Death to Smoochy".

An earnest and courteous man, Nicholai’ formal training in music enables him to also offer guitar lessons when required.


TheStar.com - GTA - Notes from the underground

What Ashifa Kassam, staff reporter of The Toronto Star and Carly Jones, cast member of this summer's hit musical Evil Dead: The Musical said about an annual audition to be buskers for the TTC. Nikolai Tichtchenko was among 169 musicians from arond the GTA area trying out this year competition.

Instrument: He’s been playing the balalaika, a three-stringed, triangular version of the guitar, for 47 years

Day job: This is it — he’s a full time balalaika player

He says about busking: “I am from Ukraine, but my instrument is from Russia.” He’s not too worried about not getting a licence — he’s got plenty of work playing his balalaika at parties, restaurants and festivals.

Carly Jones’ Evil Take: “His hands are moving so fast you can’t even see them. What he needs is a troupe of five modern dancers behind him, doing a dance to whatever he’s playing, all dressed in pastels. It’s the only thing that could make this any better for me — it’s awesome.”

Where Jones wants him: “Downsview subway station because he needs to be around the intellectual university crowd there. Only they would truly appreciate him.”

"balalaika player"
Posted by The Vision Builder at 3:22 PM 1 comment: