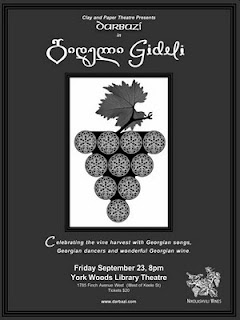 (Gideli is a basket traditionally used for carrying grapes during the harvest.)

Georgian polyphonic choir DARBAZI will be working again with the traditional dancers of the KAKHETI dance group. And to enhance the performance even more, NIKOLASHVILI WINES will be joining them with a selection from their vineyards.

YES! WINE WILL BE SERVED!

So come and enjoy the wine, the dance, and the song

in this beautiful hall at York Woods public library

artjunction/blog: Music from Caucasus and Balkans: Friendship and Wine 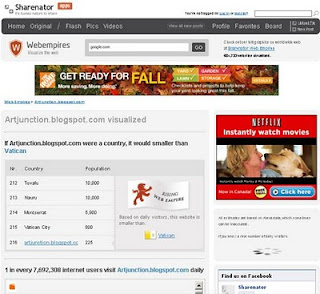 If Artjunction.Blogspot.com Were a Country, It Would Be Smaller Than Vatican.

What if all of your visitors gathered in one place?

Artjunction.Blogspot.com has more than 200 daily visitors. Want a crazy idea for a meetup? If all of Artjunction.blogspot.com visitors gathered in one place, you could try and break the world record for most people running in high heels, which is currently 200 people.

Webempires aims to visualize every website on the web. Would you like to try the sharenator's app?
Posted by The Vision Builder at 6:19 PM No comments: 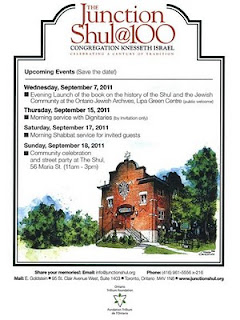 The Junction Shul is marking its 100th anniversary, and as part of its celebrations, the Junction Shul is hosting a community celebration and street party at The Shul (Congregation Knesseth Israel). The festival will run from 11:00 a.m. to 3:00 p.m. on September 18th on neighbouring streets adjacent to the synagogue (located at 56 Maria Street in the Runnymede and Dundas area) and will be the final event in a series of Centennial festivities running from September 7th to the 18th. Neighbourhood residents and the public are invited to significant event with music, entertainment, activities for both adults and children and food and beverages. There will also be tours of the synagogue and historical tours of the adjacent neighbourhood, led by local historians, and talks by past residents of the community.

links:
insidetoronto.com: Junction Shul marks 100th year with street party
As part of its centennial celebrations, the Junction Shul is hosting a street party from 11 a.m. until 3 p.m., Sunday, Sept. 18. The Maria Street synagogue's celebration will feature music, entertainment, children's activities, guided tours, food and more. The Shul is located at 56 Maria St. in the Junction.

Maria spelling/pronunciation: Back in the 1800s, the English pronounced Maria the way we would pronounce Mariah: "ma-RYE-ah".

Ontario Heritage Foundation: Knesseth Israel Synagogue
"Jews began to settle in West Toronto in the late 19th Century, attracted, as were others, by the industrial and commercial opportunities generated by the nearby railway junction. Although some undoubtedly found employment at the Heintzman piano factory, most were artisans or proprietors of small shops. Some engaged in peddling and junk collecting, while others worked at construction. The majority were immigrants from Poland and Russia. ...
Maria Street seems to have had the densest concentration of Jewish residences and family names appear which still have a connection to the Knesseth Israel Congregation, “The Junction Shul”: Alexandroff, Goldstein, Greenblatt, Kronis, Tanenbaum, Usprich, to name just a few. "
2001

Posted by The Vision Builder at 7:25 PM No comments: 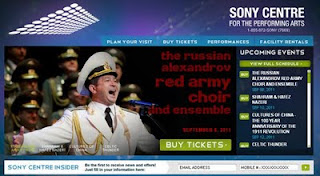 The Russian Alexandrov Red Army Choir and Ensemble is the official army choir of the Russian armed forces. They are widely regarded as the foremost artistic ensemble of its kind, twice earning the Order of the Red Banner and Red Star, the highest military decoration recognizing civilian service. Their Canadian tour will feature an astonishing 125 musicians and performers, consisting of soloists, a male choir, and dancers, together with a full orchestra performing with a mixed composition of Russian traditional and western instruments, including the balalaika, the domra, the bayan, the double bass, woodwinds, brass and percussion instruments.

rbth.ru: The best known military music ensemble leaves for India after its triumph in Canada