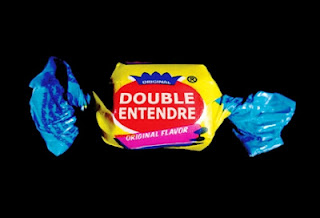 The next generation of Toronto's art stars lights up the Junction gallery district.

An exhibition by twenty-five of Centennial College's brightest and best. Guaranteed to challenge, provoke and entertain.

Like all shooting stars, this event is appearing only for a short time. If you wait, you miss it.

About The Fine Arts Studio Program

The Fine Arts Studio Program at Centennial College (Pape and Danforth) is an intensive, two year studio based course. It is well known for its hands-on, one on one approach to the creative process. Small classes, dedicated faculty and passionate students from across Ontario. Ask any of the students, and they will tell you It has earned its well deserved slogan as a place where you happily: "Get Your Hands Dirty".


Media about the Exhibition:

insidetoronto.com: College students get first taste of art life in real life
"... Janet DiBernardo sits on the Fine Arts Studio Program Advisory Committee and said she didn't hesitate when its professor and co-ordinator David McClyment, also a local artist, asked if Latitude 44 would host the show. Last year, she spoke to Centennial College students in the program about how to get involved with professional galleries. ..."
by Lisa Rainford, Mar 28, 2012
Posted by The Vision Builder at 5:51 PM No comments: 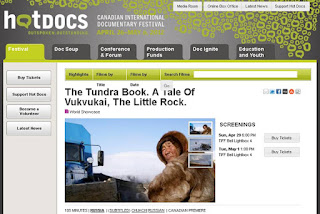 Screenshot: The Tundra Book. A Tale of Vukvukai, the Little Rock. by Aleksei Vakhrushev, High Latitudes ltd., 2011
A co-presentation of KinoArt Festival and Hot Docs
Canadian International Documentary Festival, April 26 - May 6, 2012, Toronto
Credit: hotdocs.ca + highlatitudes.ru + kinoartfestival.com
Please mark your calendars and get ready for the best showcase of documentary films in Toronto this year! Hot Docs Canadian International Documentary Festival, North America’s largest documentary festival, conference and market, returns for its 19th annual edition from April 26 to May 6, 2012. Showcasing the best in Canadian and international documentary, Hot Docs will welcome filmmakers, industry delegates and audiences to Toronto for the 11-day event. This year’s Festival will screen 189 amazing docs from 51 countries.

The Tundra Book: A Tale of Vukvukai, the Little Rock
A stunning documentary about the lives of the seldom-seen Chukchi people.

Stunning photography and sensitive direction captures the fascinating culture of Indigenous reindeer herders and their struggle for survival in Russia's Arctic Circle, one of the harshest, and most beautiful, environments in the world.

Director's Biography
Alexey Vakhrushev was born in 1969 in Anadyr' (Chukotka). In 1996 graduated from VGIK (Institute of Cinematography). Since 2000 is a director and scriptwright at the TV Company "Ethno-Online". Member of the Russian Cinematographers' Union.
Selected filmography: 1996 Birds of Naukan, 2001 Island, 2003 Treasure of Semen Dezhnev, 2004 Walrus Fang Chronicle, 2005 Hunters of Freezing Coasts, 2005–2007 People of the Bering Strait; Chuvan Treasure; Bone Coast of the North; Mist Travellers; Heirs of Taymyr Shamans; Images of Time, 2005–2008 Miracle Factory; Welcome to Enurmino!

It’s noon and -37C on Chukotka peninsula. A blistering wind slices across the tundra. In the magnificent landscape of Russia’s Arctic Circle, just across the Bering Strait from Alaska, 72-year-old patriarch Vukvukai leads his Indigenous Chukchi family in caring for their herd of 14,000 reindeer. Living in isolation except for their wind-up two-way radio and occasional visits from traders in tank-like snow vehicles, the family depends on their reindeer for food, shelter and clothing. Through the seasons, unflagging Vukvukai alternates between chuckling and barking orders at his sons and grandchildren, instilling in them the practical knowledge and spiritual traditions that have allowed the Chuckchi to survive for thousands of years in one of the harshest environments in the world. Subtly directed by Aleksei Vakrushev, an award-winning Inuk filmmaker from Chukotka, The Tundra Book provides a rare and stunning glimpse into a world still intertwined with the oldest rhythms of life.
Gisèle Gordon

2012 Hot Docs Tickets
Individual tickets to Hot Docs 2012 are $14.50. Tickets to all Late-night screenings (screenings after 11 pm) are $5.
Tickets can be purchased online here.

Courtesy of Scotiabank Students (with valid ID) and seniors (60+) can attend daytime screenings (screenings before 6 pm) for free. Same-day tickets are available at the participating venue one hour before the first screening of the day, subject to availability.

Enjoy and mark your calendar now for Hot Docs' showcase of global stories. See you there!

72 years have passed as deer herder Vukvukai lives in the depths of Chukotka. He is an old man full of energy and wisdom -- The Real Man of Tundra whose life can not be seen apart from the deer.
His people take care of a huge herd -- over 14,000 deer. Their life is a non-stop struggle for survival and well-being in the most harsh weather conditions of Chaun-Chukotka. They deeply believe in the strength of tradition and so succeed in their struggle. The ancient culture of Nomadic Chukchi takes care of them, so they preserve and follow it. As far as it is now -- their realm remains stable. This is the Truth of Vukvukai. 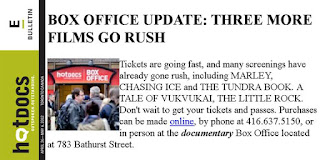 Don't wait to get your tickets and passes.

Purchases can be made online, by phone at 416.637.5150, or in person at the documentary Box Office located at 783 Bathurst Street, Toronto.
Posted by The Vision Builder at 10:30 PM No comments: 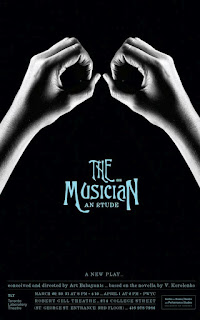 Poster: The ... Musician, An Etude
A New Play, Conceived and directed by Art Babayants
Based on the novella by V. Korolenko
March 29-April 1, 2012 at Robert Gill Theatre
Centre for Drama, Theatre and Performance Studies
University of Toronto &
Toronto Laboratory Theatre

The ... Musician
An Etude

Conceived and directed by Art Babayants
Based on the novella by V. Korolenko
Scenography and lighting design by Paul Stoesser
Co-conceived by the collective
Featuring Kevin Kashani, Shelley Liebembuk, Didier Morelli and Art Babayants

Based on a famous novella written by a 19th century Russian/Ukrainian writer, The ... Musician tells a powerful story of struggle, suffering and sacrifice as faced by one who is eternally robbed of an essential element of human experience.

Through a complex interplay of lighting, spoken text, physical gestures and live music, the show aims to challenge the audience’s perception by inviting the spectators to dive into a world where the most common signs of communication are perpetually concealed.http://www.blogger.com/img/blank.gif

* On March 30, 31 a talkback with the creators of the show will follow the performance.

Details: utoronto.ca: The ... Musician. An Étude 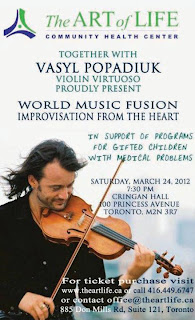 Vasyl Popadiuk, extraordinary violinist admired throughout the world and known as "The Golden Violin", will partner with the Art of Life Community Health Center, a non-profit organization, to delight our hearts with beautiful music, raising funds for programs for gifted children with health issues.

Please join us and support this wonderful initiative and may the music of love always resonate in our world like the laughter of children.

"The voices of Nature filled his playing — the breath of the wind and the rustle of the forest, the plash of the river, and the vague murmurings that quiver and die in the distance; and, behind it all, that deep, heart-swelling emotion, so elusive of definition, that Nature's discourse arouses in the soul. "
- V. Korolenko, The Blind Musician, An Etude
Translated from the Russian by Helen Altschuler
Progress Publishers, Moscow 1978


youtube.com: The best Speech - Severn Suzuki
The original speech with music and visuals - Severn Cullis Suzuki
- 1992 UN Earth Summit in Brazil
Uploaded by be2212 on Aug 17, 2009 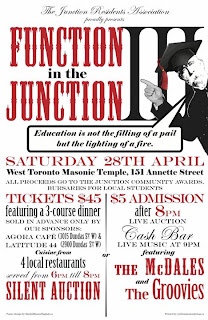 “Education is not the filling of a pail, but the lighting of a fire.”
― W.B. Yeats

FUNCTION in the JUNCTION III

All proceeds go to the Junction community awards, bursaries for local students
When: Saturday, April 28, 2012

A message from the Junction Residents' Association:

The Junction Residents Association is gearing up for our 3rd annual Function in the Junction, to be held on Saturday, April 28, 2012.

Once again, our event will be held at the Masonic Temple located on Annette Street, beside the Library.

Last year's sold-out event was a tremendous success in raising funds and bringing our community together for a good cause.

The goal of the Function in the Junction this year is to raise money to provide assistance to students for post-secondary education. All funds raised will be distributed among students from six local schools. Recipients will not necessarily be chosen on academic merit but on community involvement, volunteering and personal circumstances.

We will provide a three-course meal. Appetizer, main course and dessert for $45 a ticket. The menu will offer four choices for appetizer and main ( beef, chicken or vegetarian), and three dessert choices. Dinner will be served between 6 and 8 p.m .

There will be a silent auction for the dinner crowd and a live auction from 8 to 9 p.m. After 9, local musicians have offered to entertain us, and we'll wrap up at midnight.

Tickets are now on sale at our sponsors: Agora Cafe, 3015 Dundas St.W and Latitude 44, 2900 Dundas St.W. When purchasing tickets, customers will have the opportunity to choose their menu.

Agora: The best teas, coffees and food that The Junction has to offer. Free Wi-Fi to all our customers.

Latitude 44 Gallery Framing Décor: Dedicated to art in all its traditional disciplines as well as its current edge slicing mediums and are mandated to showcasing, supporting and preserving the work of Canadian artists.
Posted by The Vision Builder at 4:38 PM No comments: