An Interesting Experiment in Multilingual Theatre: In Sundry Languages: March 4-6, 2016 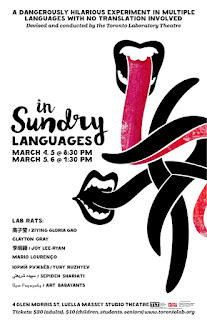 Poster: In Sundry Languages
A new theatre experiment conducted by the Toronto Laboratory Theatre
Investigating the phenomenon of multilingual acting
Performed in 10 different languages with no translation.
March 4-6, 2016 at Luella Massey Studio Theatre, Toronto, ON

The Toronto Laboratory Theatre
and The Centre for Drama, Theatre and Performance Studies

Friday, March 4 at 8:30pm
presented for the 26th Annual Conference of the Centre for Comparative Literature, University of Toronto
Saturday, March 5 at 1:30 and 8:30 pm
Sunday, March 6 at 1:30 pm (includes a pre-show talk)

After playing to sold-out houses in May 2015, this one-of-a kind experiment in multilingual theatre is back!

“In Sundry Languages” strings together a series of outrageously comical vignettes about the unexpected discoveries that come with living, laughing and crying in a second language. Languages used and abused: various dialects of Mandarin, Farsi, Russian, English, French, Spanish, Portuguese among many others. Translation: none!

It’s a perfect theatre outing for both native speakers of English and English language learners.


Find more about this Toronto's first multilingual show with no translation: 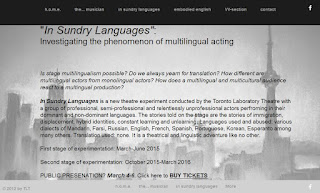 
"In Sundry Languages": Investigating the phenomenon of multilingual acting

In Sundry Languages is a new theatre experiment conducted by the Toronto Laboratory Theatre with a group of professional, semi-professional and relentlessly unprofessional actors performing in their dominant and non-dominant languages.

The stories told on the stage are the stories of immigration, displacement, hybrid identities, constant learning and unlearning.

Translation used: none. It is a theatrical and linguistic adventure like no other. 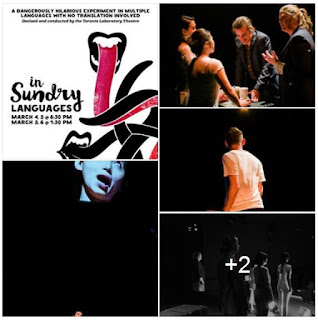 A New Play at Robert Gill Theatre: The ... Musician, An Etude
Posted by Olga ArtJunction at 3:15 PM No comments: