Let the Music Guide You through the Junction: September 22 - Junction Music Festival 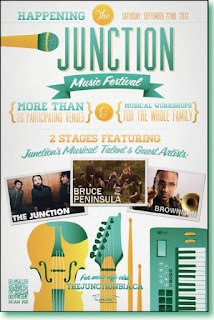 The Junction Music Festival is a Festival of Independent Music for All Ages. Let the Music Guide You through the Neighbourhood on Saturday, September 22nd, 2012.

Toronto, ON, August 21st, 2012 - Throughout the year, there are several great events and festivals for the visitors and residents in The Junction. On Saturday, September 22nd, 2012 let the Music guide you through the neighbourhood, recently hailed as “pitch-perfect < in its > development [1]”.

The Junction Business Improvement Association will host the Junction Music Festival that will run from 11 am to 2 am.

The Junction Music Festival is a festival of independent music for all ages. More than 20 venues, from cafes to interior design stores, will host music acts along Dundas Street West throughout the day.

In addition, the festival attendees can enjoy music on two stages featuring Junction Musicians as well as featured Musical Guests. Our small stage (on Pacific Ave. North of Dundas St. West) will present independent musical acts from noon to 8 PM, and will include some local favourites like Young Running, Dan Gooch & The Cedar Strippers, Philly Moves and more.

In the evening, at South West corner of Dundas and Keele Street intersection, the Junction Music Festival will showcase a free concert by musicians who rarely appear in non-ticketed public events. At 8 PM, in the heart of the Junction, at SW corner of Dundas Street West and Keele Street - you will hear the artist who has credited The Junction for being his Brooklyn-an international award winning Jazz trumpet player Brownman and his ensemble Electryc Trio. Next, indie rockers with terrific sound and the name we love, The Junction. Our closing act, musicians who recently headlined a festival in Yukon- the incredibly talented group with bounds of rolling soul- Bruce Peninsula.

Several Junction Businesses will celebrate The Junction neighbourhood’s love for the art of music by hosting family friendly music workshops, cooking Music inspired cuisine and of course hosting musical talent at different times of the day.

We hope to see you at the Festival!