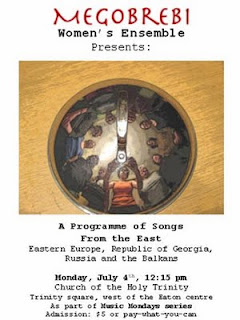 A Programme of Songs From the East
Eastern Europe, Republic of Georgia, Russia and the Balkans

Women's ensemble, Megobrebi, will take part in the "Music Mondays" series at the Church of the Holy Trinity on July 4th.

Megobrebi will be singing both folk and composed music from Bulgaria, Croatia, Georgia, as well as Finland and Russia, all of which are rich in musical tradition.

Please take a look at the brochure of the Music Mondays 2011 concert series, as there are many more wonderful groups performing every Monday throughout the summer.

Liszt B minor Sonata, poems from his new book, "Pieces in My Hands" on this piece;
Liszt concert etudes: Un sospiro and La leggierezza


About Music Mondays 2011 Season
Music Mondays offers a glorious spectrum of musicians from Toronto and all around the world with a wide range of cultural traditions and musical genres.

All concerts start at 12:15 pm and take place at the
Church of the Holy Trinity, Trinity Square (beside the Eaton Centre)
Suggested donation: $5 or more
For more information, contact 416-598-4521 ext: 304
Posted by The Vision Builder at 4:42 PM No comments: 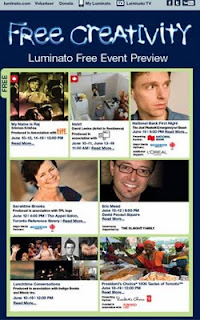 Screenshot: Free Creativity: Luminato Free Event Preview
For 10 extraordinary days in June, Toronto's stages, streets and public spaces are illuminated.
Luminato June 10 - 19, 2011: View all free Festival events
Credit: @Luminato
Luminato 2011 celebrates 10 days and nights of free creativity. There are just some events from the category: Check this out, Not to be missed!

Gain enlightening insights into Luminato events, direct from the artists themselves during each of this series' Conversations (held daily at 12:00 PM).
June 10: Festival Overview
Join Luminato Artistic Director Chris Lorway and other members of the programming team for an inside look at the 2011 Festival: how it came together and what threads and connections can be traced in the program as a whole.

A free celebration of music from the Middle East and around the world.
Hosted by the Nana Aba Duncan, producer of CBC Radio One 99's Big City, Small World.

Don’t miss rare chance to see "the best singer of her generation" for free, as k.d. lang comes to Luminato for the Canadian launch of her latest North American tour. With special guests The Belle Brigade.
Hosted by the CBC's Denise Donlon.

Treat your taste buds to a trip around the world, with gourmet street food prepared by some of the city's leading restaurateurs. Free to attend. All food items $5 each.

I spotted the Delight Chocolate as one of the participants in this year's event. Also Poutini’s House of Poutine will be on Stage at 5:00 pm on Saturday. Their 2nd Anniversary [gluten-free] poutine party with 2-for-1 special is on on June 12th from noon-9pm! Om nom nom nom!

And much, much more about Luminato, Toronto Festival of Arts and Creativity: http://www.luminato.com/ + @luminato (I'm a Luminatic) + facebook: Luminato Festival + youtube: LuminatoEvents's Channel

Posted by The Vision Builder at 10:35 PM No comments: 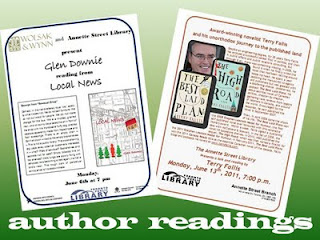 City of Toronto and One Book Award winner, Glen Downie reads from his new book "Local News". Set in the Junction, this prose collection is full of local flavour.

Local author Glen Downie, who is a previous winner of Toronto Public Library's One Book and also the City of Toronto Book Award for his book Loyalty Management, will be here Monday June 6, 7pm to speak and read from his new book Local News. This collection is set in The Junction and you will recognize many of the places he writes about.

Novelist Terry Fallis won the Stephen Leacock medal for humour in 2008 for his novel "The Best Laid Plans". In February 2011, this book won the Canada Reads Book Award as an essential Canadian book. Come meet Terry and hear about his path to publication and his humorous books, including his new book "The High Road".

There is also a Medicine Wheel teaching, special programs for Seniors, and a 2-part Personal Finance workshop.

Check out your local library!
Posted by The Vision Builder at 1:57 PM No comments: