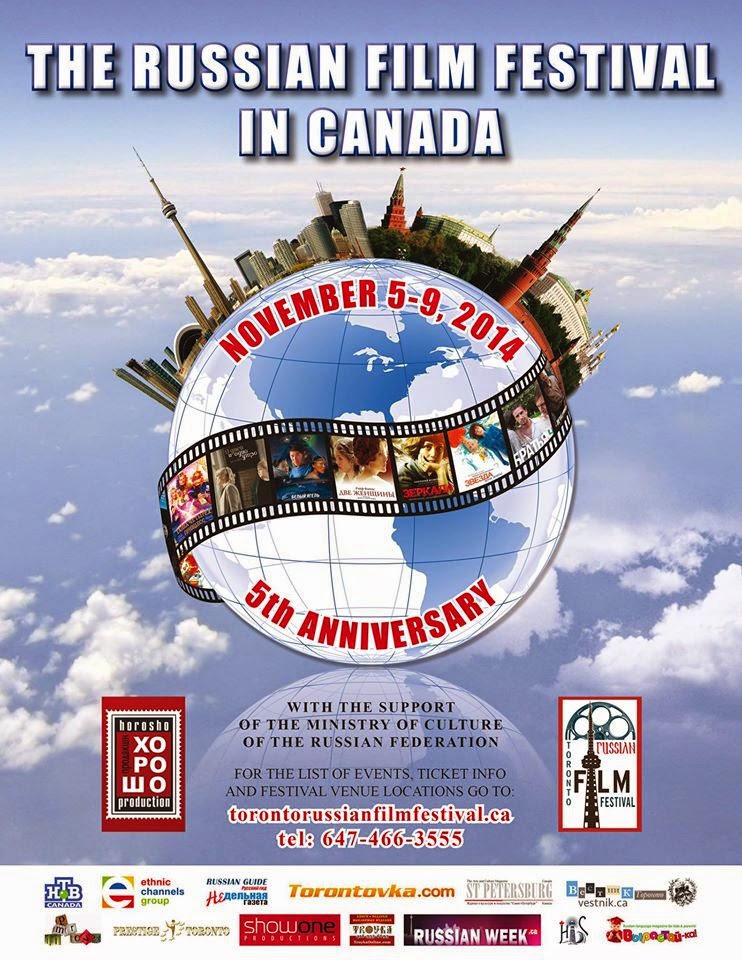 This year the Festival celebrates its 5th anniversary. And this time around the Russian partner of the Festival is a production company known as “Horosho Production.”

The program offers 8 full-length films, 4 shorts, two documentaries and 4 animated films – 18 screenings in all. In addition to the screenings, the program provides 7 informational programs: press conferences, round table discussions, master classes on directing, documentaries and casting. The organizers are planning a round-table discussion on co-production and pitching international projects. 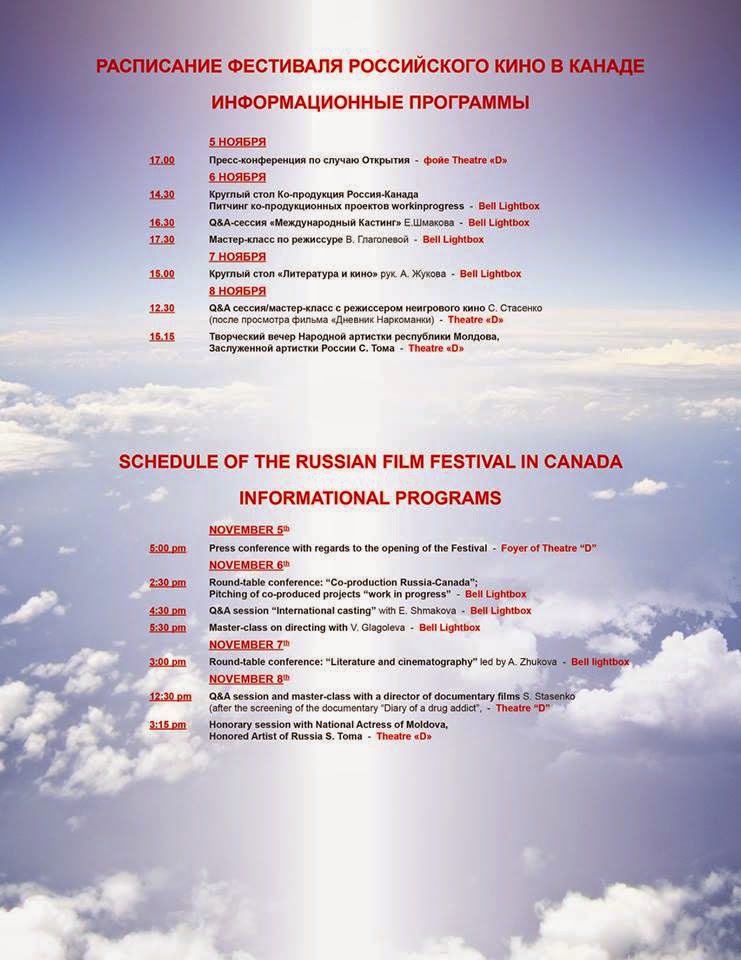 All films will be shown in Russian with English subtitles. All the films in the program have been made since 2013 and many of them have received awards at other film festivals.

There are no competitions at the Russian Film Festival but there is an Audience Award. After each screening there will be a Q&A with the creators of the film.

This year’s program has many references to classical and modern literature. The Festival opens with the North American premiere of the film Two Women (2014) directed by Vera Glagoleva, based on the play by Ivan Turgenev, “A Month in the Countryside.” The renowned British actor Ralph Fiennes plays one of the main parts in the film.

The film Mirrors (2013) directed by Marina Migunova is dedicated to the famous Russian poet Marina Tsvetaeva.

The Brothers Ch (2014) directed by Michail Ugarov shows a day in the life of the great Russian writer Anton Chekhov and his brothers.

A special place in the program is occupied by a screen adaptation of the story White Yagel (2014) by Anna Nerkagi. This film, made by the director Vladimir Tumaev, tells us about the lives of peoples living in the Arctic regions, which is very unusual and full of mysteries. This film won the Audience Award at the 36th Moscow International Film Festival in 2014.

The film The Grandfather of My Dreams (2014) directed by Aleksandr Strizhenov belongs to the genre of grotesque family comedy and raises the eternal question about how much we depend on the material well-being which suddenly comes out of nowhere.

There Will Be No Winter (2014) is a film made in the genre of fantasy by director Ilya Demichev. It boasts an all-star cast: Ksenia Rappoport, Ingeborga Dapkunaite, Aleksandr Samoylenko and Sergey Koltakov.

The drama about a girl from an orphanage who grew up to become a model will close the Festival. Nine Days and One Morning (2014) was directed by Vera Storozheva, the famous film and television personality who was awarded at TEFI and at many other Russian and international festivals. Before the screening of this film the viewers are invited to an honorary session with the renowned Moldavian-Russian actress Svetlana Toma.

The festival will have a children’s day when little viewers will see the full-length animated fairy tale Ivan Tsarevitch and Grey Wolf-2 (2013) directed by Vladimir Toropchin and a full-length feature film The Mystery of Four Princesses (2014) by Oleg Shtrom.

The short film program lists different films made by young directors. The film Unintentionally (2014) was made by Zhora Kryzhovnikov. His recent comedy Bitter! (2013) became one of the most successful films of the year. The short film Inspection (2014) made by Gala Suhanova tells a story of a dysfunctional family with children. The film Tonya is Crying on the Bridge of Lovers (2014) by Anton Kolomeets is about the generation of thirty-something year old and the passage of time; and in the film Shredder (2014) by Michael Dovzhenko we witness a highly unusual (but based on a true story) situation when the audience is asked to vote on killing a work of art.

Animated shorts from the Shar (The Ball) studio-school will be shown before full-length films.

Among the Russian delegation of cinematographers there are famous directors and actors such as Vera Glagoleva, Svetlana Toma, Aleksandr Strizhenov, Vera Storozheva, Marina Migunova and others; 14 people in total. 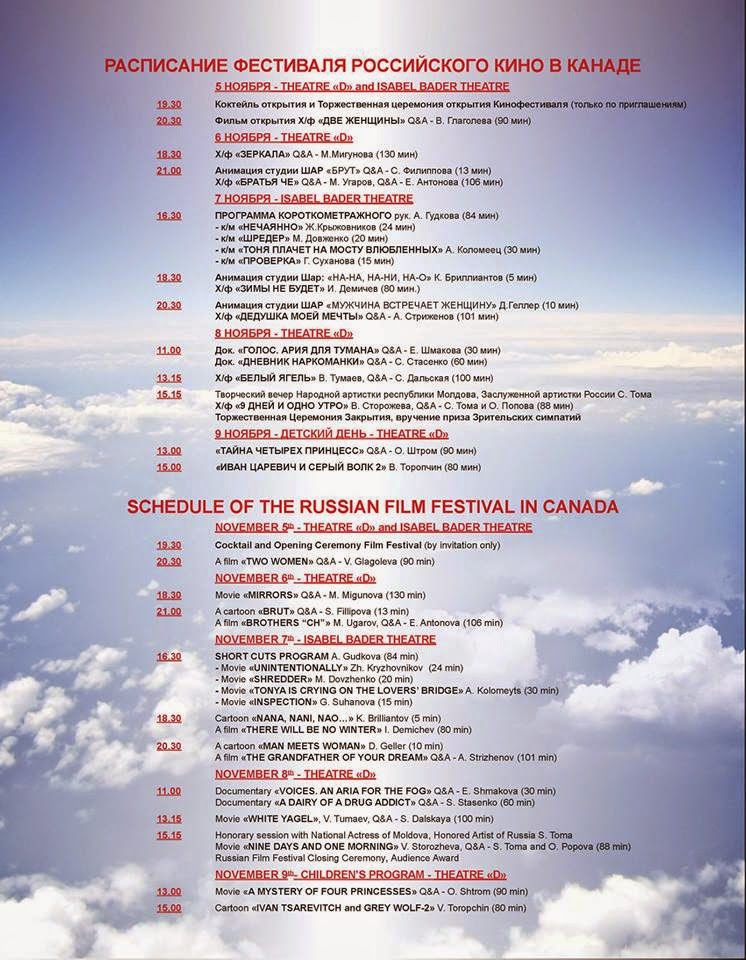 Tickets:
All tickets are free of charge. There is a $5 processing fee when you order tickets on the web site or pick them up at the entrance. It is advisable to register on the web site or by phone. The number of places is limited.

Information about program and tickets: www.torontorussianfilmfestival.ca

In 2011 the TRFF started partnering up with Russian organizations. The Festival’s status then changed. Support from the Ministry of Culture of the Russian Federation now made it possible to organize the Festival at a very high level, to invite large delegations from Russia and to present the audience with the very latest films.

Posted by The Vision Builder at 10:11 PM No comments: