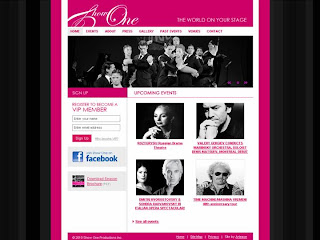 Screenshot: Show One Productions: Upcoming Events 2010
Credit: showoneproductions.ca
March 3 - 31, 2010
Toronto Calling on display at Steam Whistle Art Gallery
Photographs of the British New Wave as it happened in Toronto 1979-1981 Never before displayed, these photos are a front row perspective on a movement that changed the course of music. A glimpse of an underground era in music history, which was locked out of mainstream media, shot by former Torontonians Simon and Nick White. These photos capture a moment in time before the internet and before corporate sponsorship, a unique and exciting time which still seems to resonate with a raw energy and passion: http://www.steamwhistle.ca/events/eventdetail.php?id=152

March 4 - 7, 2010
The Artist Project Toronto
The Artist Project brings together artists, collectors and art enthusiasts for a juried sale, an emerging artist competition and an art chat series (including a panel with the Post’s Leah Sandals). Queen Elizabeth Building, 180 Princes Blvd. $12-$25. For tickets, visit http://theartistprojecttoronto.com

Under the genius baton of supernova Music Director Valery Gergiev, the internationally acclaimed powerhouse Mariinsky Orchestra (formerly known as the Kirov Orchestra) never fails to thrill, astound and astonish. Every performance is crafted with gemstone brilliance, every performance, the experience of a lifetime.

April 23-25 and April 30-May 2, 2010
Wilderness Survival - Spring
The Wilderness Experience Certificate Programme: Specific areas of concentration will include the identification and preparation of edible and herbal greenery, basket weaving, primitive fishing, direction finding, toolmaking, fire-building, constructing snares and deadfalls, and coping with the seasonal problem of mosquitoes, black flies, and deer flies. The fee covers all costs except clothing, food, and transportation to and from the weekend survival site. The course is 2 weekends in duration.
http://www.survivalinthebushinc.com/corecourses.html#SPRING

March 15, 2010 update:
Please Note...
This event has been cancelled.
Refunds will be available at the Point of Purchase starting Mar 17, 2010. Internet & phone orders will automatically be cancelled & refunded starting Mar 17, 2010.
For More Information:
http://www.ticketmaster.ca/Russian-Ice-Symphony-Featuring-Iliya-Averbukh-tickets/artist/1414856

April 17 - 23, 2010
Sprockets Toronto International Film Festival for Children
Sprockets is an initiative of TIFF that offers children and youth the opportunity to learn about cultural perspectives from around the world through the power of the moving image. For young film-goers and their families (ages 3 and up): http://sprockets.ca/

[Event listing courtesy of PA]
Posted by The Vision Builder at 10:02 PM