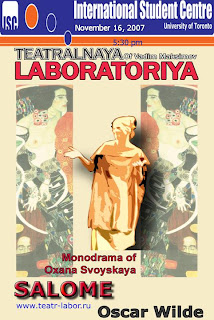 Three images of Salome are portrayed in this play: tragic, comic, and the one, which exists on "other side of good and evil". The birth of Salome as a theatrical figure, her existence and her death are at the centre of the action. Three different images of Salome are the masks, which are situated in the polemics with each other, and result in revealing of the character’s essence.

The Theater Laboratory of Vadim Maksimov (TL) was founded in Saint-Petersburg, Russia in 1984. The object of TL’s activity is experimental research in field of drama: European dramatic symbolism, Russian futurism, Oriental synthetic theater, Antonin Artaud’s “Théâtre de cruauté”. Since 1996 TL has followed directly in the development of Antonin Artaud’s dramatic theory.
The actors of TL take specific training, which was developed in TL in the course of the last 8 years. The training includes oriental practice of psychophysical self-regulation. It is based on the Artaud’s idea of human’s body “energy centres”. Every centre contains a set of senses and can be expressed in the form of plastic motions and voices. The specific training helps to escape from the everyday mask.
The main principle of TL’s performances is a rhythmic and psychoenergetic act organization, an integration of voice, gesture and word into a united impulse, which could completely affect on audience’s perception.
To date, Theater Laboratory has produced about twenty plays including world classical ones (Sophocles “Antigona”, Oscar Wild “Salome”, August Strindberg “The Dream Play”, Euripides/I. Brodsky “Medea”) and plays on modern European dramaturgy (“Fosse/Frostenson/Fragments”, Milorad Pavich “Party”). Some of the plays have never been performed in Russia before (Igor Terentev “Giordano Bruno”, Antonin Artaud “Samurai or ...”, Dzeami Motokie “Kagekie”, Jean Gene “Elle”, William Batler Yeats “Only jealousy of Emer”).

THE ENTIRE WEEK IS FREE AND OPEN TO EVERYONE!!!

Posts that contain Oscar Wilde per day for the last 30 days.

Get your own chart!
Posted by The Vision Builder at 11:37 PM